This final section continues right where we left off: with Jupyter. We had just finished going through our Jupyter server launch script, so now we will start a job using our container and that launcher.

Starting the server with SBATCH#

As with the container-building SBATCH script, this one is available under /mmfs1/sw/hyak101/python. Copy it to your home directory, and we'll go through it.

The only part of this you shouldn't change is the job name, since we automated getting the node hostname for a job called klone-container. Everything else is up to you: the number of CPUs, the memory, the partition, and the time limit.

2. Starting the Jupyter server in the container#

Here are our scripts in action: start the container (with the read-write version of the container launcher), and have that container run our Jupyter launcher. Once the job has started, watch the job's output file for changes. It'll be named jupyter-server-12345678.out, but with your job's ID, so we can check it out with:

Once you see that informational message, the Jupyter server is running and we're ready for the last step: the port forwarding.

The last Bash script of the guide#

I swear, this is the last one. You can download it here, and then we'll walk through it:

We start by saving the output of a remote command that we run on the login node. The file with the Jupyter information, ~/.jupyter-port-and-token, will look something like this:

That line is what ends up in our JUPYTER_INFO variable, i.e. JUPYTER_INFO='34567 7e5c7a539a01'. If the variable is empty (which we check with -z), exit after printing an error message.

Separating the port and the token#

Here's a bit of advanced Bash:

If you want to learn more about string manipulation in Bash, check out The Linux Documentation Project's Advanced Bash Guide.

Let's break down the ssh command at the top:

Print it all out#

This part is easy: print out the web address we'll use to connect to our Jupyter server, and print out the kill command you can use to close the SSH forwarding when you're done.

Putting it all together#

All we have to do now is make sure the node is correct, start the forwarding, and open a browser:

Copy and paste the web address into your browser, and you should be connected to your Jupyter server.

When you're finished, you can use the kill command we generated to ensure your port forwarding is stopped:

All the difficult work is behind us. If we want to use our container interactively, we'll just use all the shortcuts we created.

1. Start an interactive job on the login node#

First, we'll request an interactive job in the checkpoint partition, with a single CPU and 16GB of memory. The most important part, if you're going to connect directly to the node, is that you need to name the job with --job-name=klone-container so that our node-finding script works properly.

2. Get into our container#

We automated this step, too. Now we're in our container, attached to a read-write overlay filesystem.

And that's all there is to it. Before we move on to non-interactive jobs, here's the background on Slurm compatibility:

Running Slurm in any container requires the following:

Running non-interactive jobs is a little more complex, since we'll need to pass a script to our container. Let's say you've written a bit of code that uses one of the conda environments in your overlay: we'll call it ~/do-some-research.py. We'll start by writing a Bash script to get into the conda environment & run the script:

Now we'll make an SBATCH script, where we pass this script to our container:

This will start a job named 'research' with 8 CPUs, 64GB of RAM, and a time limit of 8 hours. Don't forget to change the account or parition. This tells our container (with our conda overlay in read-only) to run the ~/start-research.sh wrapper for our ~/do-some-research.py Python script. All that's left is to submit the job with sbatch ~/research.job and wait for the results.

This final section is broken up into two parts. The first part is trivial: using VSCode's Remote-SSH extension to connect to an interactive job & edit code. The second part isn't so trivial: we're going to use an undocumented VSCode feature to SSH directly into our container on the node so that VSCode extensions can, for instance, run Jupyter Notebooks from our conda environment.

Let's start with the easy part.

Using VSCode on a compute node#

All we need to do here is add a single step to our interactive job setup.

Once again, we're requesting an interactive job with 1 CPU and 16GB of memory. Just have to wait for it to be allocated.

2. On your local machine, get the job's node#

Once we have the job, on our local machine we'll make sure our SSH configuration has the correct node:

3. In VSCode, connect with Remote-SSH to the node#

With the klone-node SSH target ready to go, we'll first use the Remote-SSH extension to connect to a host:

And, after VSCode finishes installing the remote extensions, we should see that we're connected:

That's it. You can now open remote folders like your home directory, or your group's gscratch directories, and use VSCode as you usually do.

Using VSCode in the container#

This is the tricky part. If we want VSCode itself to be able to run anything in our container's conda environments, we'll have to connect directly to the container. First, we need to add a couple new SSH targets.

Additions to our local SSH configuration#

We're going to modify our local SSH configurations again, starting with the main config at ~/.ssh/config:

These new shortcuts will allow us to connect (through klone-login) to our container, either with ssh klone-container-rw or ssh klone-container-ro depending on whether we need to make changes in our overlay. As mentioned before, the %r in the RemoteCommand line is an SSH config abbreviation for the remote username—i.e. your UW Net ID—so no need to change it here. What this is telling SSH is that, when we run ssh klone-container-ro, the first thing it should do before allowing us to interact is run our launch-container-ro.sh command.

Huge caveat: this VSCode feature, as far as we can tell, is undocumented. If this doesn't work, it may be too difficult to be worth troubleshooting. With that disclaimer out of the way, let's modify our VSCode's settings.json:

Once you have it open, you need to add the following:

Using Remote-SSH to connect to the container#

Assuming you still have your klone-container job running, and your ~/.ssh/klone-node-config has the correct compute node for the job, we can connect directly to the container. Select the Connect to Host... option in the Remote-SSH extension again:

But this time, connect to klone-container-rw:

It may take a few moments to connect, but once you're in it will look quite similar to when we connected directly to the node. Since we're already in the container, we can interact with conda right away:

In this demonstration, we're going to run the the VSCode Jupyter extension, which means we'll have to install the extensions on klone. When you browse the 'Extensions' tab, you should see an option to "Install in SSH: klone-container-rw":

Install both the Jupyter and the Python extensions before continuing.

Once the extensions are installed, open up your home directory in VSCode and we'll try to make a new Jupyter Notebook:

The first time you run the VSCode Jupyter plugins, it'll ask you where you want to run Jupyter. In this case, we're going to select "Default", because it will run Jupyter "locally" (in the container):

It will prompt you to reload the window, which you should do, and finally we'll make sure we're using the right Python:

You'll see a list, probably something similar to this, and you can select whichever conda environment's Python you want: 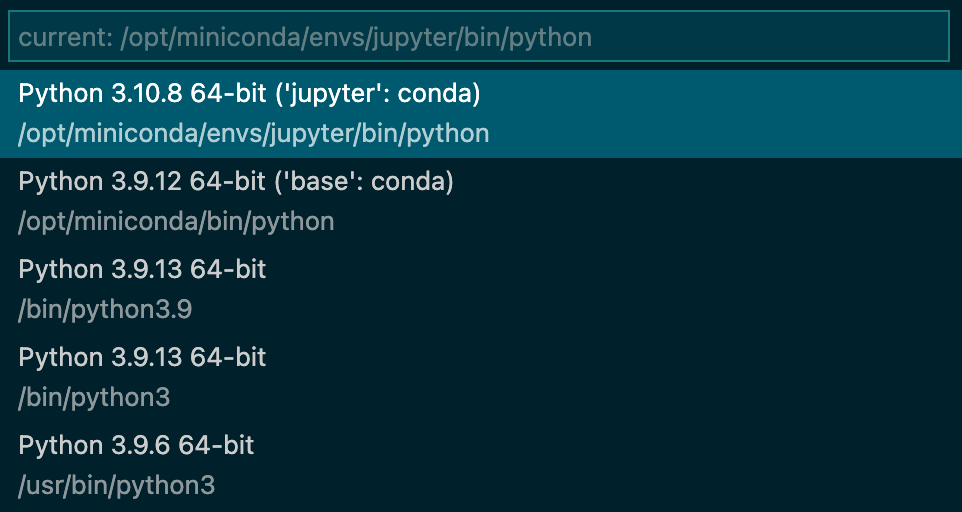 And with all of that configuration in place, we should be able to test it out with something simple, like this:

Making this work is advanced, requiring a large stack of interdependent pieces: we're connecting to directly to our container, on a compute node, running an interactive job, with our overlay in read-write mode, and installing & running VSCode extensions by using an undocumented, hidden feature of the Remote-SSH extension.

There are quite a few things that can go wrong, and it's tough to troubleshoot when they do. For most users, we recommend using JupyterLab or Jupyter Notebook in your browser, using the interactive job from before.